Garden Re-Leaf Day is Greenfinger Charity's national fundraising event and it's held every year. It is now a major feature in the horticultural and garden industry's calendar with garden centres, growers, suppliers, QVC, trade associations, gardening clubs and societies, as well as our corporate partners and many, many others getting involved to support this event and raise funds for Greenfingers Charity. It has raised over £600,000 since its inception back in 2012.

Click on the images below to register your event or participation in the Garden Re-Leaf Walk and Cycle Challenge through the Oxfordshire countryside. 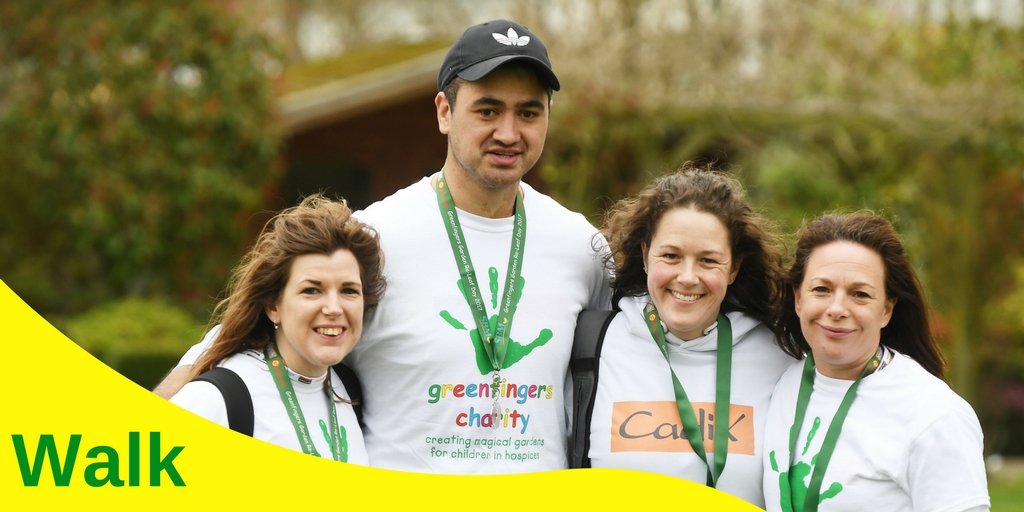 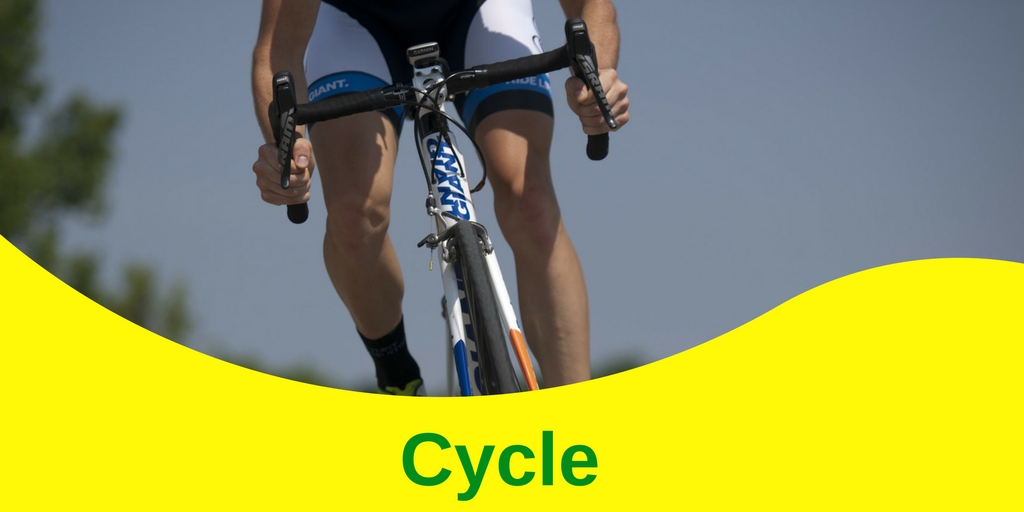 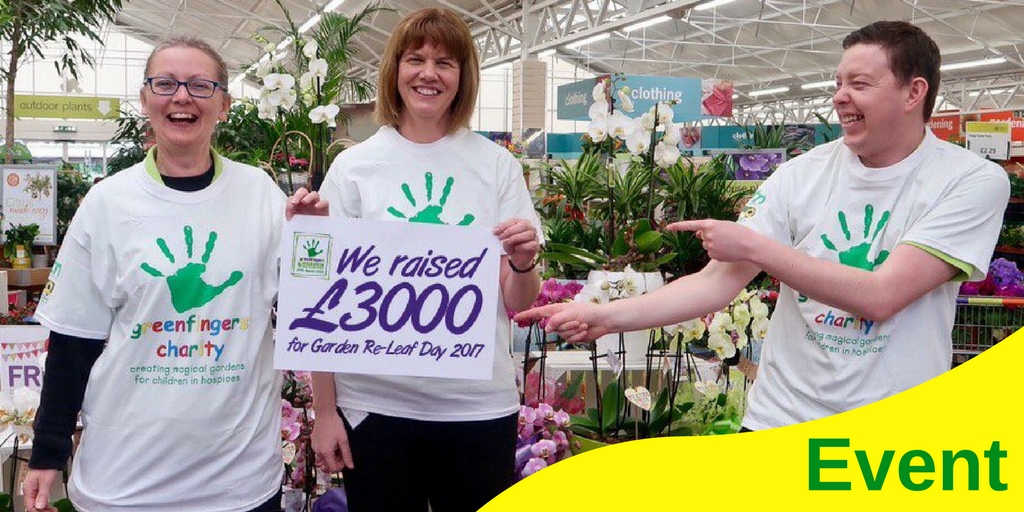 What happened on Garden Re-Leaf Day 2019?

Greenfingers Charity's Garden Re-Leaf Day 2019 was once again a huge success. Garden industry and Greenfingers supporters came together to create a thriving day of activities and FUNdraising events.

Over 120 people from garden retailers, suppliers and manufacturers along with teams from outside the garden industry walked a sponsored 5,10 or 20-mile circuit through the Buckinghamshire countryside on the annual Garden Re-Leaf Walk. Starting and ending at World’s End Garden Centre in Wendover for the second year running, participants were put through their paces on a trail through the beautiful Buckingham countryside. Teams from Mr Fothergill’s Seeds, Vitax, Hozelock, Great British Cards, Elho, GIMA, HTA, DAC Ltd, Taylors Bulbs, Poplars Garden Centre, DLF Trifolium, Glee, Teleflex, Hornby Whitefoot PR and Kew Green Hotels donned their walking boots for the scenic route, taking in some stunning sights along the way.

2019 saw the second Garden Re-Leaf Cycle Challenge with 29 intrepid bike enthusiasts donning their lycra before taking on the endurance test of 25, 50, 75 or 100 miles with Steve Burden, one of the industry’s best loved photographers the first across the finish line.

Across the country, garden centres, suppliers and friends of Greenfingers came together to create a vibrant day of FUNdraising.

Haskins and Thurrock Garden Centre both held a special raffle for customers, whilst Ayletts held a special Goodwill Coffee Morning in its Dahlia Coffee House, where visitors enjoyed a hot drink and fun tombola to win prizes. CW Groves Nurseries also held a coffee morning, plus a special Gardeners Question Time for customers to learn more and get answers to their burning questions.

The theme of quizzes and questions continued at the Old Railway Line and Poplars Garden Centre, with Curry & Quiz Nights, whilst over at Paradise Park, and Altons garden centres, customers were treated to a gardening quiz amongst other activities. Perrywood also hosted a sold-out quiz night.

On the day Whitehall Garden Centres donated £1 from the sale of every hot drink and cupcake sold in the restaurant, with a donation of £1 for every planter also sold. A 50p donation from every coffee or tea sold was pledged by the team at Klondyke and Strikes Garden Centre.

The Blue Diamond team kindly confirmed that £5 from the sale of every Fryers ‘Friend’ rose – the Greenfingers Charity Rose – would be donated on the day, with £1 donated thereafter.

Over at Coolings Nurseries a Behind-the Scene nursery tour took place, with donations from plant sales winging its way to Greenfingers.

The team at the Garden Store/ Hillview Garden Centres, went ‘green’ for the day, whilst Longacres held a sponsored Static Cyclotron at its Bagshot centre.

On 23rd March the team at Rowan Garden Centre took inspiration from the Garden Re-Leaf walk and donned their walking boots for a special charity fundraising walk.

Squires Garden Centres kept the momentum going with its Create and Grow Mother’s Day Planting Weekend (29th – 31st March), with donations from the event going straight to the Greenfingers charity. Another centre making the most of the spring rush will be Sunshine Garden Centre, which will be running special Muddy Boots Gang Children’s activities throughout March. Each session costs £5, with all money raised being donated to Greenfingers.

Mr Fothergill’s smashed its £10,000 target with a range of activities including the Garden Re-Leaf Cycle Challenge, and in-house static bike ride which saw the team stack up 167 miles between them. Other activities included a bake sale and the ‘mushy pea challenge’.

The QVC family also continued its support throughout the Garden Re-Leaf weekend, with a £1.50 donation from every plant or product sold during a special Garden Re-Leaf/ Greenfingers show. Presented by Richard Jackson and Simon Biagi, the weekend of programming attracts thousands of viewers, and more importantly, buyers.

Elsewhere the amazingly supportive team from Kew Green Hotel’s Holiday Inn Chester South site, donned their walking boots to walk to the summit of Mount Snowdon, which stands at an impressive 1,085m.

Our Head of Fundraising and Communications, Linda Petrons said: “I cannot thank people enough for their ongoing support and dedication to making Garden Re-Leaf Day such a continued success. I am endlessly touched by the generosity, creativity and selflessness that so many demonstrate, both on Garden Re-Leaf Day, and throughout the year. Every penny makes a huge difference to those that use Greenfingers-funded gardens, so on behalf of them, and my team, the biggest possible thank you.”

What happened on Garden Re-Leaf Day 2018?

Over 70 people from garden retailers, suppliers and manufacturers walked a sponsored 10 or 20-mile circuit through the Buckinghamshire countryside starting and ending at World’s End Garden Centre in Wendover. 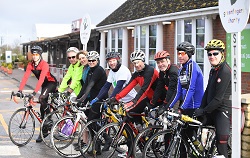 Teams from Taylors Bulbs, Mr Fothergill's, Hozelock, Briers, Poplars Garden Centre, Durston Garden Products, and Elho all saddled up to take on the gruelling course for to raise vital funds for Greenfingers.

Matt Jackson from Mr Fothergill’s was first across the finish line having completed the 100 miles route. 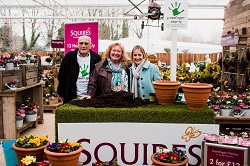 Garden Re-Leaf founder Boyd Douglas-Davies set all 11 of his Hillview stores a challenge for this year’s Plantathon – to plant 101 plants in 12 hours. Totalling an impressive 1,111 pots, £1 from every planter sold went  to Greenfingers

The staff at Squire’s Garden Centres in Woking also got their hands dirty, potting over 500 lovely, bright and cheerful spring plants for Garden Re-Leaf, at their opening weekend. There was also a guest appearance by gardening expert and presenter Charlie Dimmock who helped to plant her own containers in aid of Greenfingers. 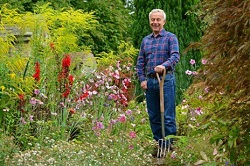 A special QVC Gardening Show was broadcast on the popular shopping channel on Sunday 18 March.

It raised a staggering £31,800 from the sales of plants, bulbs and garden sundries. 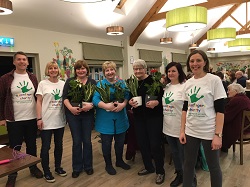 Many garden centres got quizzical for Garden Re-Leaf Day, with masterminds at Perrywood Garden Centre and Poplars Garden Centre each raising over £1,600, whilst all monies from the general knowledge experts at Altons Garden Centre totalled £450.

Tates Paradise Park held a garden quiz for local gardening clubs, as well as an auction of flower arrangements made by a local floristry group, plus a sale of special Garden Re-Leaf Day cupcakes in the coffee shop.

Old Railway Garden Centre raised a spectacular £1,000 for Greenfingers during their Garden Re-Leaf Fundraising Day, which included a Quiz and Curry Night. 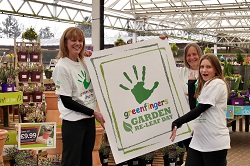 Pondkeeper held a raffle in their Billingham-based shop to win pond-planting goodies. Aylett’s Nurseries held a tombola and coffee morning in store.

Regional sponsored walks were organised for those who couldn’t get to Wendover.

Orchard Park staff walked approximately 15 miles to Lakeside Garden Centre in Warminster. The Hozelock team completed a sponsored 10km walk through the beautiful surroundings of Sutton Park, a national nature reserve close to their Birmingham site. And Longacres held a sponsored walk which started at the Garden Centre in Shepperton and finished at Bagshot, with a pit stop at their Chobham branch. 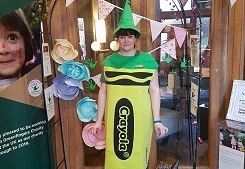 Kew Green Hotels put the FUN into fundraising by 'Going Green for Greenfingers', with staff turning their hotels green across the country.

Many competed for the coveted 'Best Costume' prize, which was won by Emma Harding for her brilliant Crayola outfit.